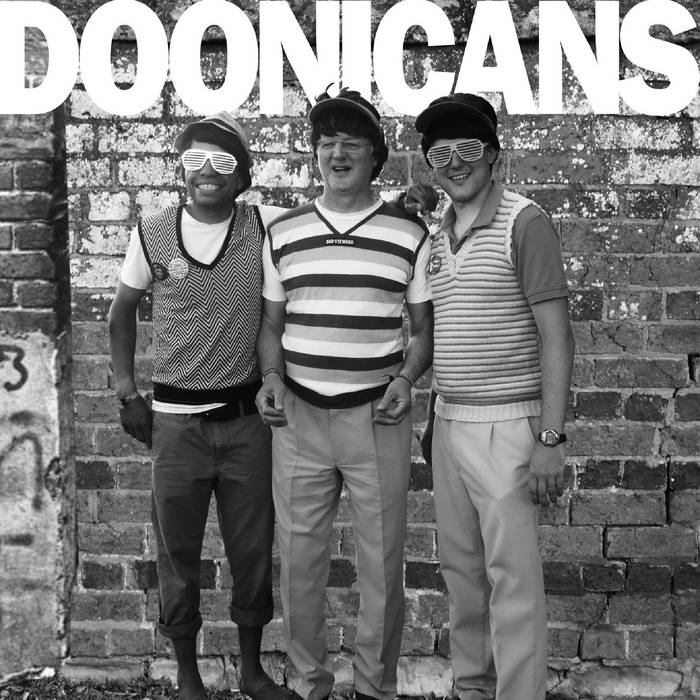 A whole year in the creating, 'EY UP! LET'S GO marked the second line-up of Scott, Alan #1 and Andy recording a lot of the crowd-favourites they'd been gigging since 2011.

With its Ramones-esque cover, eight of the twelve tracks took their roots from the 70s music scene featuring punk, glam, disco and pop classics.

The album was launched exactly one year to the day that former founding member Danny Doonican had left the band, and so became a marker of what the 'Mk. II' line-up of the band were capable of.

The band were touring the 'EY UP' album when they played their first festival show at Beautiful Days Festival's Bandstand in 2012, cementing the band's reputation for comedic parodies.

This album comes with a bonus PDF of lyrics and sleeve notes in the form of a 'Listener's Guide' (taken from Scott Doonican's book 'Songs In The Key Of Tarn').

I thought it would be fun to leave this review of the album which was written when it was released. At least we sorted that issue of appealing to people beyond Yorkshire...

"Cover albums. Always a tricky prospect for even the most accomplished of bands. Do you strive for a painstakingly accurate recreation – only to be accused of missing an opportunity to innovate, or do you risk your own adaptation with potential backlash from those long devoted to the original? The more loved the band, the higher the stakes.

Not afraid of a challenge, Barnsley trio The Bar-Steward Sons Of Val Doonican have somehow succeeded on both fronts with latest offering ‘Ey Up! Let’s Go’. Offering musically perfect recreations (complete with added ukulele and accordion) of much loved classics from The Ramones, The Clash and Elton John, to more diverse choices from the Beastie Boys, House Of Pain and Kaiser Chiefs, the band add their own twist reworking lyrics with an abundance of references to their South Yorkshire home.

As you’d expect there’s plenty of humour to be found in the likes of ‘(You Gotta) Fight For Your Pint (In Barnsley)’, ‘Hi Ho Mr Traffic Warden’, ‘Avon Calling’ and ‘Jump Ararnd’ (not to mention the ‘B.I.S.T.O’ hidden track). And whilst it would be easy to applaud this as mere bit of fun, there’s no denying the album has been put together with a lot of passion and respect. Even the artwork is a superb spoof of the Ramones self-titled.

The album’s most accomplished moment comes from a cover of the Kaiser Chief’s‘I Predict a Riot’ – sampling David Cameron’s (yes, you did read that correctly) speeches from last year’s London riots. A simple yet obvious choice that manages to raise the cover above and beyond the original – adding a feel authenticity that was perhaps lacking on the 2004 hit.

Of course, there will be some that find the album too much of a novelty to take seriously (hence why Hayseed Dixie never quite escaped the club circuit with their similar blend of Rock meets Bluegrass). You also have to question the album’s appeal outside of Yorkshire. However, clocking in just over 30 minutes ‘Ey Up! Let’s Go’ is over long before there’s any hint of outstaying its welcome. A rare accomplishment for any cover album, and one that offers plenty of laughs along the way."