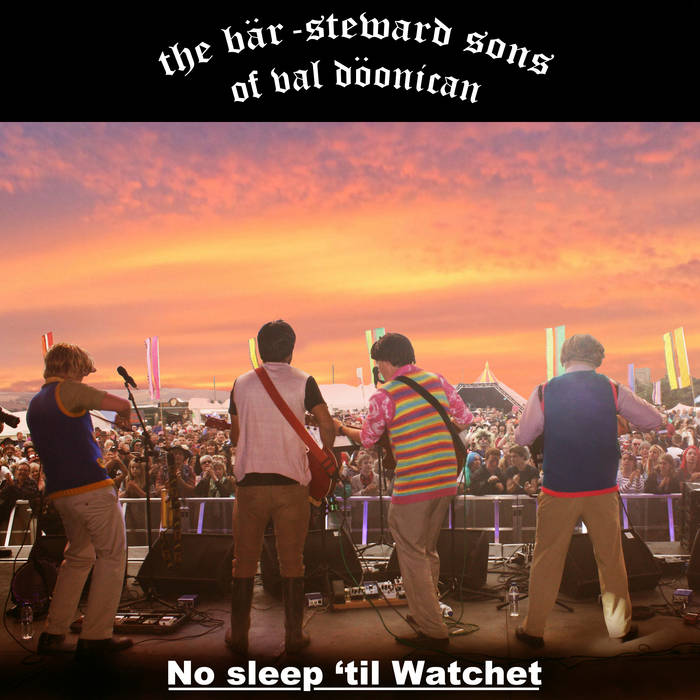 This was our third visit to Watchet Music Festival... in 2013 Scott Doonican & Alan Doonican #1 performed at the Udder Stage, in 2014 they were joined by Bjorn Doonicansson, and for their hat-trick performance Alan #2 had replaced his brother from the same mother and Andy Doonican came too!

Just as we had got our heads around the idea that we would be playing the festival's 2nd stage for a third year running, we had an 11th hour call from the organisers saying they wanted to see Scott in the production office... thinking that it may have something to do with him sneaking into Bob Geldof's personal backstage portaloo (which was under lock and key), he was somewhat apprehensive, but it appeared that they wanted the band to appear on the Main Stage. Another band had been forced to pull-out from their slot at the last minute and as a result there was now a 50 minute space for a daft little comedy band from Barnsley to show what they could do.

Obviously the brothers Doonican said 'YES' and took the slot, knowing that the other band would take their 6.30pm slot on The Udder Stage when they arrived. As it turned out, they didn't arrive and so both shows were back on the cards... 4.15pm on the Main Stage, 6.30pm on The Udder Stage.

To add to the chaos, whilst onstage for the first of the two sets, Sounds of Sirens (who occupied the 8pm slot on the Udder Stage) were asked if they could play a second set at Chris Evans' Carfest, and after some negotiations, our set was swapped yet again, placing us before our old pal John Otway & Wild Willy Barrett.

The planets had clearly aligned as we dropped upon two of the best slots of the day. The crowd were magical. If you were there, you'd know!

Stuart Blakeledge, Ash Lines & Mike Wiles from The Sweetchunks Band and Jacob Fox appear on Jump Ararnd at the Udder Stage courtesy of Cedric's Cider Bar. We were drunk in the West Country!